My Blog is Running Again

There’s a lot to be said for a blog. I think a website for a business is essential. If you offer services, a small static site will suffice, though you can have it as big as you want.

If you offer merchandise or manufacturing, you may want a more dynamic look or a store. That will require a staff to do the work for you. Should you outsource this to save money?

Answer: I will answer this for a small business in a small town, like Port Huron, Michigan. Absolutely not. We once had a County Administrator from New York. He came in with a burst of wind. He discovered problems with his accounting background. He found much money misuse. He was modest and said anyone could have done what he did. But the county commissioners, none of the members did!

He tried to do good and he was fought and criticized to the hilt. I emailed him one day about five years ago and that same day he emailed me back, thanking me for my concerns and offered that things were happening. This was around 2009.

Maybe I set the curse, by saying, I wouldn’t blame you if you left, and went back to beautiful New York State with it’s Finger Lakes, Adirondack Mountains & the Catskill Mountains. 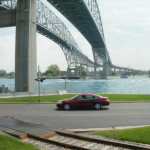 St. Clair River with Canada across the water

Mr. Groden said in his email to me, ‘to keep the faith’. I did. But things seemed to stay

the same. As one county member would say, right here in ‘River City’ (a much used too often phrase) things don’t seem to change in Port Huron.

Well he must have gotten that right, because three years ago Shaun Groden announced he was going back to New York for his wife, so she could be closer to  New York City.

But I read between the lines, and it was a narrow width set of them. He saw what he calls today in New York State a need to be in a ‘Quality of Place’. And I believe he did not feel that Port Huron had that quality.

You know when he came here, he was excited, he bought a home in Fort Gratiot, was able to explore the lakes and rivers that we have an abundance of and I believe he thought we were making progress.

But he was an outsider to many in the area and I think he felt that he would be better off moving back to where he was from where perhaps he could make a difference. 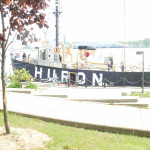 Huron Lighthouse Boat – an asset to the city

Well this blog is up and running and I am wondering if I will get comments and whether they will work now that is up again.

As I started saying a business needs a website but second it needs an outlet and a blog is one part of it.

I will continue this next time until then I will see you on the Internet!

This entry was posted in Port Huron, St. Clair County. Bookmark the permalink.