It all started as a Tweet from actress Melissa Gilbert and an article in a local newspaper. The Tweet from Ms. Gilbert was an answer to one I had, about the Movie Credit Subsidies given to movie studios in Michigan being the best thing that has happened in Michigan in a long time and her Tweet that now they are going to disappear.

I then came upon this article in the Port Huron Times Herald. http://www.thetimesherald.com/story/opinion/editorials/2015/03/11/film-incentives-make-michigan-movie-star/70171886/. Melissa read it, sent out a new Tweet with the Times Herald link and said who votes these idiots into office.

I certainly didn’t have an answer, but I looked. I found the Legislator that sponsored the bill, Dan Lauwers Republican. I didn’t know the district Mr. Lauwers was in, so decided to find out. To my astonishment he was from Yale, Michigan close to me. Even more close, was he was owner of the Eastern Michigan Granary. Wow, that is close, three miles from me. 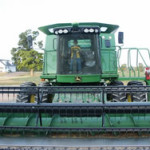 John Deere tractor. These tractors are expensive, and this one has a GPS controlled trajectory system that can be programmed to plant the straightest and most efficient corn acreage on God’s greenest acres.

What Representative Lauwers also has is a very lucrative business. Every day during harvest time, farmers come in with their corn crop and other grains and unload there precious livelihood into large piles, piles of corn probably 2 or 3 hundred feet high. With the use of corn alcohol as a fuel as well as a grain for cattle, this has been lucrative to the farmers and to Eastern Michigan Grain Company.

Now my grandparents were farmers, my Grandfather Krumm and Grandmother Krumm raised my mom in Tawas City and would farm 120 acres of land and another 40 acres of land to raise many crops, sell their milk to a company that came twice a week to pick up the cream that they separated. (My wife proudly displays the last separator my grandparents had in our foyer.

But my grandparents were not wealthy farmers, and they would

have good years and bad years. During the bad years they might get a government subsidy to help them. It wouldn’t be much. My grandparents were poor farmers, but they got by, using at outhouse and two outdoor hand pumps.

Now come the 21st Century and the modern Internet connected farmer, well I don’t know if they are farmers but rather Ranchers, as they are invested in expensive equipment, tractors with GPS controlled navigation through corn fields that allow them to sit in air-conditioned comfort listening to their favorite music while the overhead satellites go to work to keep their route precise to the inch.

These mega-farmers or Ranchers as I call it, do this with the help of something called, 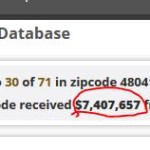 This is one of the highest paid areas in the state!

(yes, you guessed it) a subsidy. In Dan Lauwers District some of the highest paid subsidies exist. In fact (Click here to see the top paid recipients) in the Wales, Michigan area alone, over seven million dollars in moneys have been paid since 2005. The highest paid in the county, perhaps the whole state has received over four million dollars since 2005. That is some 400,000 dollars a year.

Now I don’t know all the details and usage of the money. A farmer or rancher in my opinion is doing a very honorable job and since they are at the mercy of the elements and can have a devastating year that could through their whole operation into bankruptcy in short order. You see we need a healthy and vibrant farming community in our country, and Michigan is no exception as it is one of the viable industries this state has continued to have as the recessions of the 1980s and 2000s have given us, so harshly.

But this leads me to wonder if Representative Dan Lauwers has created some ‘conflict of interest’ when he is opposing the subsidies of an industry, (Movies) that came into Michigan with the likes of ‘Make My Day’ eminence Clint Eastwood. He came and made the move Gran Torino, filmed on location in Detroit. Many people were employed and people became excited.

A man, Jimmy Lifton wanted to build a studio that would be a permanent fixture, Michigan’s first movie studio, Unity Studios. That would have created new jobs, permanent jobs. He ended up in a dispute with the city and then left town, abandoning the movie lot.

Understandable, Michigan has been in a mess. It needs money to fix its roads. That seems to be a problem in Michigan, that other states have seemed to find a solution. They spend money, fix the roads and then they have nice roads. In Michigan we spend money, but then we still have lousy (people joke about Michigan’s bad roads) roads. What gives?

I don’t know the answers, but what we shouldn’t be doing is allowing a young representative who has a business that clearly benefits from government subsidies telling the Michigan people we can’t afford these Hollywood types here, because the state just can’t balance its books.

Lets find a solution to this dilemma, because as I Tweeted to Melissa Gilbert and she agreed by Re-Tweeting, the Michigan Film Initiative has surely been the best thing that has happened to this State in more years than I care to remember!

This entry was posted in Jobs. Bookmark the permalink.